see on map
Kosharitsa - is a quiet place suspended over the bustling Sunny Beach. It is surrounded by beautiful greenery, forests at the foot of the Balkan Mountains, Stara Planina. Here, tourism takes place in harmony with nature, because the area around the village has been covered by the Nature Project 2000 program. Birds migrate through it, which protects this area from excessive human interference. It is enough to come here once to see how beautiful it is here. For those who are looking for peace and relaxation, and at the same time would like to be able to be at a large bustling resort is the perfect solution. The unique qualities of this place like clean air, great nature, nice local people make you do not want to leave.
Phenomenal views of the sea stretched out from here, and the location on the hills makes it open to visitors countless mountain paths that are really worth the hike. Along the way, you can meet turtles, lizards, interesting vegetation and sometimes another tourist.
In Kosharitsa there are selected places offering accommodation, several grocery stores, restaurants offering local cuisine, a pharmacy. There is also a regular bus service that goes to Sunny Beach every day during the summer.
Holidays in Kosharitsa in the hills and surroundings - beautiful, unspoiled nature will provide you with real peace and the atmosphere of rural life.
History: The lands around Kosharitsa were first inhabited by the Thracians, who later mixed with the Slavs and Proto-bulgarians. The territory around the village has preserved numerous traces and valuable findings from the Roman epoch.
During one of the historical stages, the village fell under Byzantium rule, and is later returned back to the Bulgarians, and then the region was again conquered by the Byzantines, to be seized by the Ottoman Empire afterwards. Until the Liberation of Bulgaria, the territory remains under Turkish rule, although this does not affect the Bulgarian lifestyle and commonsense of the local population.
The village itself was found by the beginning of the XIX century.
Grandpa Ivan and his heirs are considered to be the founders of the village. He settled in the lands of today’s Kosharitsa in 1846. He had a sheep pen and a hut nearby the gully of the village. Here he found settlers form Sarakioi and Karabunar, who helped him settle the village that first bore the name Kashla-dere.
The name Kosharitsa came later. It comes from the word “koshara” – cattle pen, as breeding was the major occupation in the village. 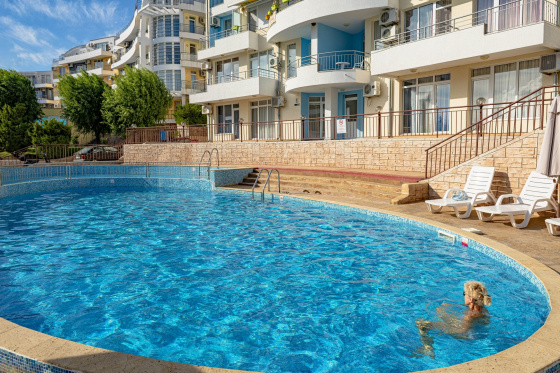 Sunset Koszarica is a wonderful complex designed for families with children, or for people who particularly need rest and relaxation. 6 swimming pools, restaurants, parking in front of and in the object.
7000m
distance from the beach
6
number of pools
50m
distance from the parking
0m
distance from restaurant
500m
distance from the supermarket
from 88zł/ day
SEE 1 APARTMENT
This site uses cookies to provide services at the highest level. If you do not agree to store cookies on your device, adjust your browser settings.
OK